We returned  to Buuri Secondary school, wondering what exactly a church service in Kenya would be like!  We had asked for something in the hour and a half range, having been told that they can sometimes run more than 3 hours.

The service started with songs by the school choirs – first the Seventh Day Adventist choir, then the Catholic choir and then the Protestant choir. We were under big white tents, without siding.  There was a sound system, including an electric piano with a strong drum beat.

We knew that we were going to be asked to perform a couple of songs, and were a bit anxious waiting for our turn.  Our first song was “Thank You Jesus” – with the second verse in Swahili!  There were claps of delight when we launched into the “Asante Sana Jesu”.  It wasn’t perfect but hit the mark for sending a shout-out to our hosts in their own language.

Our second song was “This Little Light of Mine” with additional verses of “Shine on Buuri school” and “Shine on P.E.I.”   We kept waving for the audience to join in but they didn’t.  Then our school host asked us to sing it again – with everyone singing along!  After that, we were all happy to sit down, our part of the service over.

Then the mothers of the students were invited to come up and sing.  They were all wearing brightly coloured outfits – their Sunday best  – and their song was lively, with lots of dancing.  Then….one of the oldest women went into the crowd, we thought to have a rest.  But she went over to Tammy and pulled her up to dance.  One by one, we joined the performance.  It was terrifying and thrilling all at the same time!  I have a video that I will post when we get home, but until then, there are some photos below.

The rest of the service included a sermon, speeches by the local school board chairman and by our host, Jennifer Murogocho.  There was an offering and then a final hymn.

We were then invited to go and tour the classrooms with the students while the parents had a meeting with Jennifer and the board chair.

What started as a “tour” turned into a fascinating cross-cultural exchange between the Canadians and the Kenyans.  We did get to see their classrooms and their books.  But they had so much more to tell us – and ask us.  As on Games Day, the questions were all over the map.  There was lots of discussion of the Kenyan tradition of paying a dowry for a woman – and the idea that Canadian women were “free”!  There were heavier topics, from same sex marriage, to drugs, to politics.  But most of all there was a lot of frank curiousity – and a sense from the Kenyan youth that they could ask us what they wanted to know.  Which we welcomed, and we asked questions in return.

It was an intense experience.  At one point I was surrounded by a group of youth who wanted to see a photo of my dog – because they couldn’t believe he sleeps in my room and goes in the shower!  (Okay, maybe that is odd even by North American standards?)  Pets are unheard of in Kenya, a luxury most couldn’t afford.

And then there was the hair touching!  Anyone with blonde hair, in particular, had their hair touched multiple times today!!!   Our Kenyan friends were so comfortable by this point that they even played around for the camera with our hair.

The students from Buuri headed back into the classroom after we left.  With exams just a week away, they had to make up the time they missed during our visit.

We will see them at least one more time before we leave Kenya.  We have definitely forged a connection with many students.   Not all, of course.  Some were totally disinterested in us.  But the ones who were interested were really, really interested!

We finished the evening with a home-cooked meal at the home of Jennifer Murogocho.  The big hit of the evening was potatoes and cooking bananas mashed together!

Tomorrow we head to two schools new to the Farmers Helping Farmers School Twinning Program: Naari Girls School, a high school, and Michaka Primary School.  As part of this trip, the youth each raised $500 towards a project in Kenya and they chose building school gardens at these two schools. Tomorrow, we will be planting cabbage, onions, swiss chard and kale in their screened gardens.  We will also be visiting some small scale dairy farms, or shambas, and the Machaka Orphanage.

Here’s my Swahili lesson for the day:  Someone asks HABARI GANI?  How are you?  Answer: Nzuri.  Good! 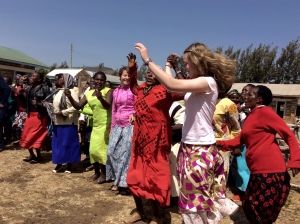 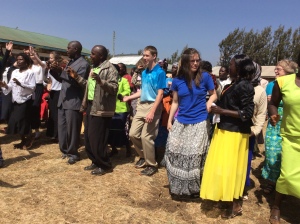 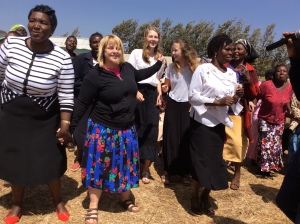 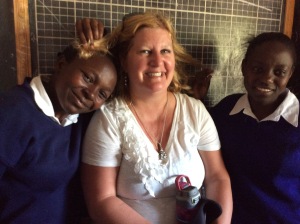 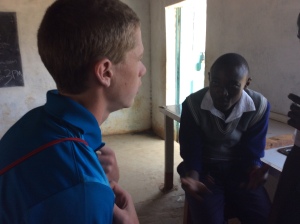 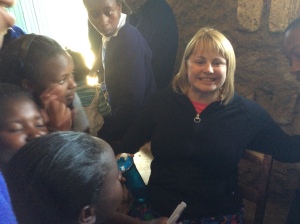 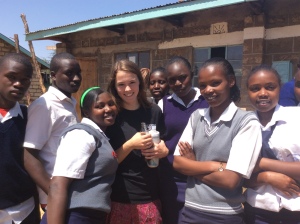